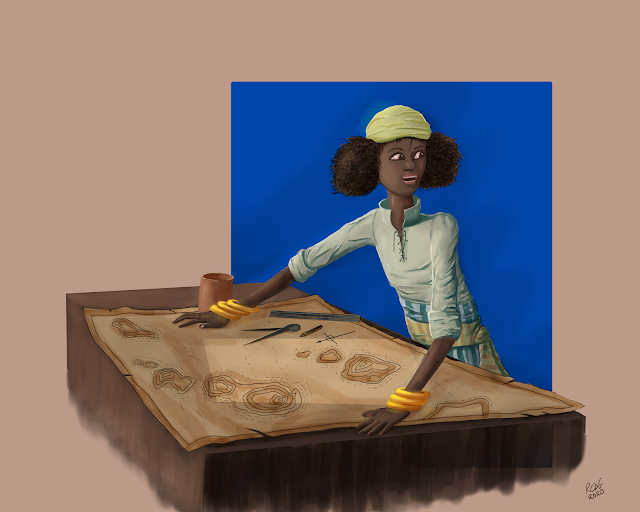 I'm working on developing a digital art process that works for me. I'm not there yet, but here is where I am today.

Much of it is based on Aaron Blaise's technique. I recommend his tutorials. He's a very skilled artist who has developed an effective process, as opposed to me who is trying to be a better amateur. I use Krita rather than Photoshop because I prefer it. The core process doesn't change.

I had doodled an idea in pencil that I scanned in. Then I refined the pencil using a pencil, well a digital one 'Pencil Large 4B' in Krita. From various attempts I'm leaning toward an ink brush, for this picture I used the pencil for texture. Not sure it mattered. Having good line work really does matter to me. I'm a lot faster without having to 'find' the image as you do without lines.

Under the drawing layer is one for flat 'local colour' aka the 'Flats' in the comic world.

On top of the flats and line layers is a layer set to Multiply. This becomes the shadow layer. I used a 'Charcoal Rock Soft' brush to give the shadow some texture. Can you tell I was thinking a lot about texture for this picture? In the past I've used a simple opacity only brush and that works. I wanted texture this time as an experiment. I did one pass then added another multiply layer to deepen some shadows. These two can be merged. I felt I had more control keeping them separate. My plan was to lose the original lines in the shadows.

Next layer on top of the stack is set to Overlay and was for highlights.

The final top layer was a normal layer and I used any brush I fancied to refine the image. I call this modelling as I fix and tune the image. I used a standard air bush and 'Wet Textured Soft' brush.

I think the image works. I have to fight the urge to merge the layers and work a 'modelling' layer. I think I may go for major flats and shadows then merge to see how that works.

www.krita.org My favourite digital painting tool.
Creature Art Teacher This is Aaron Blaise's website. I would recommend his tutorials, check out his You Tube too. The Art of Aaron Blaise
Trent Kaniuga's You Tube Channel Another talented pro, his You Tube channel is good. He sells tutorials on Gumroad. Visit it Trent's Gumroad Channel
Posted by Roderick Gladwish at 12:41