Do you bring a knife to a space fight? This was my dilemma. 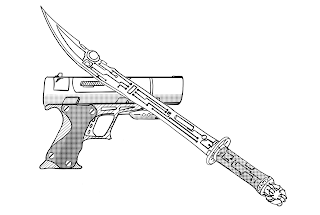 I was writing a story and bladed weapons turned up on a spaceship. I wasn't planning for them to be there and yet there they were. Sometimes this happens. I'm writing a story and its internal logic overrides what I think of as sensible reasoning. Worse than knives, which are useful tools in their own right, these were swords barging into my futuristic tale. So the question I agonised over was: should the swords stay?

Could I justify keeping blades in a SF story?

The long held romanticism of bladed weapons keeps them in fiction. Think Excalibur (King Arthur) or Sting (The Hobbit or Lord of the Rings). In sagas of old, whole sections would be given up to swords and their history, even their making. Swords were technological marvels and signs of power so of course they were going to be significant in the past. Amazingly Science Fiction, even when set in a high-tech universe, keeps coming back to swords. Most prominent is the Star Wars Universe and their obsession with the Light Sabre. It's interesting how they don't have Light Bayonets or Light box-cutters.

I am writing a (much) harder SF yarn with rapid targeting systems, powerful guns and no 'space magic'. Sword vs multi-barrel chain gun...hmmm I don't think so.

Star Wars also brings up the myth that a sword or knife will protect you. They go as far as stopping blaster bolts. I've seen Internet pages where people talk of Ninjas deflecting arrows or even bullets with their Katanas. The myth is strong, as they often are. Don't expect a blade to protect you that way. Yes, I too have seen demonstrations of skilled martial artists parrying incoming arrows, it's just not the norm. In my story universe of hyper-sonic projectiles my characters wouldn't survive a second attempting that.

All my arguments were saying get rid of the things, yet they were clinging in there.

Are there other excuses to keep antiquated weapons in a hi-tech story?

Frank Herbert writing Dune got away with it by introducing them as a way to combat personal defence force shields. No force shields in my story.

Ritual is a great way to keep the over-sized razors in. Think of officer's swords in our twenty-first century armed forces or Star Trek's Klingons' obsession with them for their ritual combat. I had no such luck. There were rituals because I had people in my story and boy do we breed rituals, but none about swords.

A final nail in the coffin was that ever since guns became a reliable tool they've dominated combat.

There is a little counter to that point. Close in the balance changes and many law enforcement services have a standing rule to shoot any blade wielding person if they get within a certain distance. That distance is a bit negotiable. I've heard 15 feet (4.6m) and 21 feet (6.4m). Seems a long way away doesn't it? Knives can still be effective because it's amazing how fast a distance can be closed with adrenaline running hot in your veins.

My view was that someone wouldn't pick a gun over a knife despite the shifting dynamic as the two parties get closer. There was no magic, no force fields (no technical excuse) and no ritual; therefore, they would not be used in the future. I had logic on my side and I could erase them from my fiction - job done. One of my characters disagreed.


When a character argues the case.

Occasionally a character will get away from you, he argued that in space they were perfect. Yes, I know I sound like I've gone barmy arguing with a character, but it happens. His reasoning was thus:
No pun intended: could I shoot down his list?

Stealth. No sound, no light, no smoke or heat makes them hard to spot. It is one of the reasons they are still used by the military today. If high-tech sensors are involved suddenly that's a big plus. Particularly give you're going up against machines (See Humans vs Robots).

No recoil. If you're in zero-g and not anchored, thanks to Newton's Laws of motion, if you fire a gun the bullet will go one way and you the other. Makes an accurate second shot difficult. Note: a firer's high mass and therefore inertia means they wouldn't be flying backward at the speed of the bullet, but they would will move. If you're in a suit designed for gun firing, thrusters on board could compensate - see I'm arguing back.

No stray projectiles. One of the big dangers of shooting is when the shooter forgets bullets often go through the target. If the shooter hasn't kept that in mind tragedy can follow. If you're in a spacecraft the last thing you want to do is damage something vital that is be keeping you alive. Stray shots could do that, accurate shots might do it too.

Since it's list week and these rules can never be repeated too many times I've written the four rules for gun safety below. Rule Number Three applies here. If you ever write about a character shooting a gun, keep these in mind, whether they follow these rules or don't will say a lot about the person you have created. Also if you ever shoot - follow these rules!

Multifunctional. Unlike guns, which tend to be for putting holes in things. Blades cut, and you can choose what you cut. Even a sword, which is a tool for butchering humans, can be used for more than carving flesh. If they are sturdy enough they can cut rope, clear plants, severe wiring, hammered into the ground they become an anchor, if shiny they can act as a mirror to see round corners or signalling. Imagination is the only limit.


Did the Swords Stay?

Did my character's arguments hold sway, or did the little voice going: 'don't be stupid, this is daft, swords - are you having a laugh?' win out? Yes they stayed, and as swords are want to do, they gained names and grew into significance. I did have one further excuse: my characters had to make their own weapons.

In my defence two of my other characters thought it was daft too, but their arguments failed like mine.

They are sometimes in a different order.

About the 21-foot or the Tueller Drill
How Close is too Close?
Here are people thrashing at the problem on Reddit
A Game Designing Forum with the same problem.
Posted by Roderick Gladwish at 12:48 No comments: